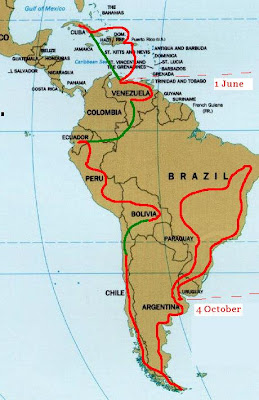 It's interesting how it all becomes a little more final with the buying of a ticket. I've been building up to travelling for ages now - over a year - but only now, when we've finally purchased something definite, do I actually feel like I'm going travelling!
Myself, Alan, Welly and Ed went into USIT and waited for what seemed like an eternity before speaking with someone re: South America 2007 - THE TRIP. Disappointment awaited us - we wanted a return trip to Rio, leaving at the end of September. The first available flight to Rio was the end of October, and was pricey. Damn. Thankfully, our helper in USIT, Martha, was a bit of a bleedin' legend, and she managed to hunt and duck and swerve and negotiate and give us some more options. After many false starts, we have now come up with an almost perfect solution - fly into Buenos Aires, and out of Caracas! That way we don't have to double back on ourselves at all, and get to do a circuitous route of the continent.
We fly out of Ireland on 4 October, and land in Buenos Aires. Then we're looping up to Brazil for a couple of weeks - so see Rio, etc. - then down, down, down to Patagonia and icebergs and glaciers and moon-land, then up Chile into the Andes, a quick flight from Santiago to La Paz in Bolivia for the Salt Flats and other such wonders, then across Lake Titikaka into Peru for some Inca madness, up into Ecuador for Amazon jungle treks, then we're flying from Quito to Caracas in Venezuela. There, Bones will leave our happy crew for Ireland on March 26th, but we will continue onwards into Cuba and the Caribbean for another two months - happy days - and then back into Caracas to fly home on 1 June. Myself and Bones made the trip into town on Monday, and payed it all off. So it's official!
I'm too thrilled to even think about it properly. Mainly, I'm concerned about getting money together. If Al wants to come home, and then fly straight back out again to either North America and Canada, or China and South East Asia, then I'll need some serious moolah. Which means a loan. Which means a headache!
But besides all that, I'm going to South America!!!
I can't wait, I can't wait, I can't WAIT!!!
70 days, and counting...!
Posted by Sarah Peace at 9:40 am 1 comment:

Karl Pilkington Quotes - the man is a lunatic! 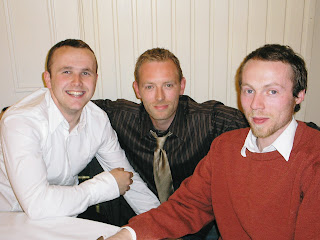 Well, Alan (he's the gorgeous one on the right, next to my big brother & almost-brother-in-law) is away in London seeing Bright Eyes (lucky sack), while I stay here and keep the home fires burning - I'll get my revenge next week, by sunning myself in the South of France without him!! (Still...I do miss him already, though. And I guess I'm gonna miss him next week too!)

Aesop's Fables
"That's the problem with them fables, they're putting animals together that wouldn't meet. I don't know where a scorpion is knockin' around with a frog."
-Podcast Series 3, Episode Two

Art
"Stop looking at the walls, look out the window."
-Podcast Series 2, Episode One

Biology
"You know how they say people have six senses? There's loads more than that. [The ability to feel someone looking at you], that's been around since man and dinosaur were knockin' about."
-Podcast Series 1, Episode One

On dopplegangers - "How would I know which one I was?"
-Podcast Series 2, Episode One

"Does the brain control you or are you controlling the brain? I don't know if I'm in charge of mine."
-Podcast Series 2, Episode Six

"At some point, somethin has had it away with a leaf" [Karl's explanation of an insect which has evolved to look like a leaf to protect itself from prey]
-Podcast Series 3, Episode Three

Christmas
"As long as you're rememberin' baby Jesus, does it matter when your rememberin' 'im"[Karl on how he hates Christmas being the same date each year]
-The Podfather Trilogy , Episode 2 Thanksgiving

Food
"Where you are is what you eat. When I'm in London I'll have beans on toast for lunch. On holiday — what? Tapas? Go on then I'll have a bit. You eat whatevers in that area."
-Podcast Series 3, Episode Four

On cutting open avocados- "It's a food that ain't worth injuring yourself for. If it's a hassle to get into, leave it to the experts."
- The Podfather Trilogy , Episode 3 Christmas

"They say it all started out with a big bang. But, what I wonder is, was it a big bang or did it just seem big because there wasn't anything else drown it out at the time?"
-3 Minute Wonder, Episode 2

"You can be an ugly baby and everyone goes "awww innit nice?" There was some women in a cafe the other week that I was sat in, and she came up and she sat down with her mate and she was talkin' loudly goin' on about "oh the baby's lovely." They said it's got, er, lovely big eyes, er, really big hands and feet. Now that doesn't sound like a nice baby to me. I felt like sayin' it sounds like a frog. But I thought I dont know her, there's only so much you can say to a stranger. I dont know what kept me from sayin' it."
-The Podfather Trilogy , Episode 1 Halloween

"I think some bacteria have better lives than that" [Karls interpretation on the life of an Eskimo]
-Podcast Series 1, Episode Five

"What's that plate that's above a saucer but below a plate?"
-Podcast Series 3, Episode Four

Medicine
On seeing an ultrasound picture- "It was an awkward situation because she was happy with it. I was like 'Oh God'. It was an odd looking thing. I couldn't say 'Oh, it looks like you' because that would be a dis."
-Podcast Series 2, Episode Two

Nature
On jellyfish - "They are 97% water or something, so how much are they doing? Just give them another 3% and make them water. It's more useful."
-Podcast Series 2, Episode Two

On seals - "Its between a fish and a dog."
-Podcast Series 2, Episode Three

"They keep saying that sea levels are rising an all this. It's nowt to do with the icebergs melting, it's because there's too many fish in it. Get rid of some of the fish and the water will drop. Simple. Basic science."
-3 Minute Wonder, Episode 4

"They've found this spider, in the jungle. Three foot long, it eats chicken. Bit weird, innit. People moan saying that you shouldn't lock animals up and all the rest of it, but to be honest I wish it was locked up. The idea that it's roaming in a jungle... get it locked up."
-3 Minute Wonder, Episode 4

"It's like the panda, they say that's dying out. But what do they do? When you see them they're just sitting in the jungle eating"
-3 Minute Wonder, Episode 1

"I saw a cockroach playing Pacman. It was on the internet, right, and somebody had linked up a cockroach to err... to some... I can't even be bothered explaining it, but that's what I'm saying - everything is moving on"
-"The Podfather Trilogy, Episode 3 Christmas"

"I've been watchin birds more than insects recently, and the thing I've found with pigeons is: they've got wings but they walk a lot"
-Podcast Series 3, Episode three

People
"Walking down the street in London with Suzanne, saw a little homeless.. well I didn't see the homeless bloke right, I saw a leg stickin out of a doorway, thought 'here we go', right. Walked past it, right, you're not gonna believe this. Homeless.... chinese fella. I've never seen one of them."
-Podcast Series 1, Episode Four

Powers
"Just sort of wander about and that, and just not get seen" [What he would do with the power of invisibility]
-Podcast Series 1, Episode Four

Sayings
"If you live in a glass house, don't be chucking stuff about." - Karl interprets the phrase "Those who live in glass houses shouldn't throw stones".
-Podcast Series 1, Episode Six

"People who live in a glass house have to answer the door" - Karl invents his own phrase based on "Those who live in glass houses shouldn't throw stones".
-Podcast Series 1, Episode Six

"You don't have to do it straight away, but just do it before it gets really bad" - Karl re-evaluates the phrase "A stitch in time saves nine".
-Podcast Series 1, Episode Seven

"You can only talk rubbish if you're aware of knowledge."
-Podcast Series 2, Episode Six

Sex
"I was walking past a sex shop an' that. One, it was open early which I never understood, it was about eight o'clock in the morning. Who needs butt plugs then?"
-Podcast Series 1, Episode Two

Technology
"We've invented most of the stuff that we need and now we're just messing about"
-Podcast Series 1, Episode One

"Just pop it on your wrist." - Ricky asks Karl how his 'invention' of a watch that counts down your life would actually work.
-Podcast Series 1, Episode Five

Travel
"I think it's clever how Rome have kept a load of old stuff. There's no overheads, yet people are going over there to see it."
-3 Minute Wonder, Episode 2

"Neil Armstrong, that spaceman, he went to the moon but he ain't been back. It can't have been that good."
-3 Minute Wonder, Episode 2
Posted by Sarah Peace at 1:47 pm 1 comment: